With freight rates firming up in most shipping markets, ship owners have been less inclined to sell their older and – let’s not forget, debt-free ships for recycling. In its latest weekly report, shipbroker Clarkson Platou Hellas said that “there still remains a clear lack of stability across the market and even apathy, with end Buyers still not fully developing a healthy appetite to acquire tonnage. This is despite the small flutter of sales, as evidenced below and last week, which many industry players felt would restart the market after the non-existent summer months. Instead, it is a market with no traction as local fundamentals such as the domestic steel price in both India and Bangladesh (unfortunately suffering a daily drop this week) continue to slip further as the week has gone on and keep end Buyers cagey as to their purchasing concerns. This has resulted in any negotiations struggling to gain any major momentum with both Owners and Cash Buyers left more than frustrated at the current market sentiment. This is coupled with the upcoming Diwali festival which is normally met with some prebuying excitement and dramatically improved sentiment; however, this year has not been the case and 2019 is starting to look like one to forget for the recycling industry”. 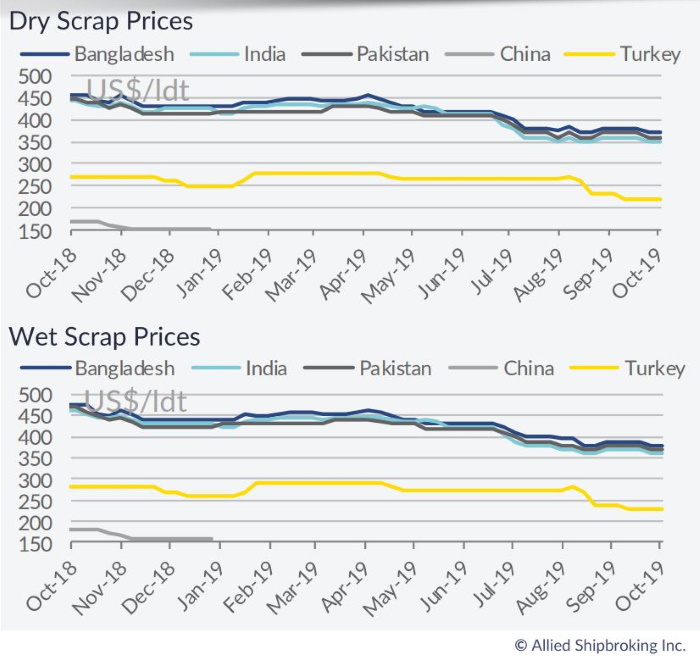 Similarly, Allied Shipbroking said that “the current healthy freight market levels and the persistence of scrapyards to retain relatively unattractive offered prices levels have resulted in a very quiet demolition market over the past week. Subdued activity was further chipped away by the Diwali celebrations. In Bangladesh, the market remains the most competitive compared to the rest of the Indian Sub-Continent, but a slow-down has been noted recently here as well. In fact, local fundamentals have deteriorated with steel price falling significantly. Meanwhile, low offered prices in India have limited sellers’ interest as of late. Local steel prices have slumped further this past week, while volatility in the Indian Rupee is adding to the uncertainty that has been shaped the Indian market for some time now. Given the poor fundamentals in India, Pakistan has had an opportunity to return with a more competitive position, with some breakers now showing signs of improving their offered price levels. However, with limited concluded activity noted thus far, it looks as if things are not expected to change relatively soon”. 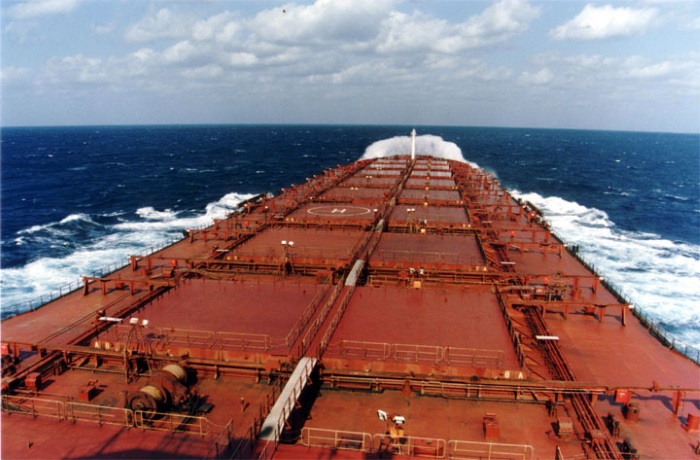 Meanwhile, in a separate weekly report, GMS, the world’s largest cash buyers of ships noted that “despite hopes that the markets may be on the rise once again, alarming reversals across all (subcontinent) locations over the past month seem to be firmly signaling the opposite. A raft of speculative Cash Buyer fixtures above the USD 400/LDT mark seem to have been highly misguided, with almost all local resales reportedly taking place at ever decreasing / loss making numbers, leaving concerned Cash Buyers in negative territory, during what has been a rather worrying and loss-making fourth quarter of the year. Yet, given the inevitable onset of IMO 2020 regulations that will affect the entire maritime industry next year, currently missing is the healthy supply of vessels for recycling that many were anticipating as a result of, especially as 2019 is nearing an end. Meanwhile, all freight sectors continue to perform admirably, particularly the VLCC sector, where rates briefly shot up to over USD 300,000 per day last week! On the local market front, Bangladesh and India have both suffered some alarming reversals in local steel plate prices this week, just as many thought that levels and demand were gaining some momentum, especially after a notably lackluster summer / monsoon period. Moreover, even after the recently announced halt on imports of cheap Iranian billets into the Pakistani market, local Recyclers continues to agonize through a self-induced tonnage starvation, as steel mills close and End Buyers struggle to present any serious / firm numbers, perhaps too nervous to jump aggressively back into the game after such a prolonged period on the sidelines. India once again props up the demo price rankings for another week, but is due to head off for Diwali holidays at the end of this week, thereby ensuring a quieter period of festivities ensues until early next week”, GMS concluded.

Iceland Bans Use of HFO in Its Waters

Get a free quote

Give us a call or leave a message, we endeavour to answer all enquiries within 24 hours on business days.